Training is a fun thing!  We get to use our brains!  Yes, dogs have brains for you none believing readers out there who think we are just “dumb animals”. 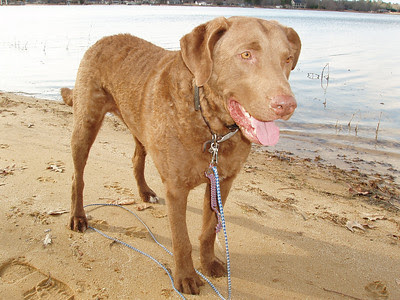 The first of the 3 commands in the title is “drop it”.  Once your buddy understands “drop it” and performs it without question, we’ll cover the other 2 commands.

First you need to plan the training session shortly before breakfast or supper.  This way we’ll be really, really lookin’ forward to that treat in your hand.

Second, be sure to have our most favorite treat, and plenty of them in your pocket or treat pouch.  It has to be something really, really tasty.  I know lots of my buddies LOVE cheese.  You’re goin’ to feed us LOTS of treats, so we probably will be satisfied with less food in our regular meal.

Third, you need a long lead or a “check cord” like the one I’m wearing in this picture.  This is especially important if your buddy likes to play “keep away” with toys.  That’s what I thought you were supposed to do with bumpers or anything that was thrown or given to me when I came to live with my Humans.  The check cord allows you to keep your buddy close by you for this exercise.

You aren’t going to throw anything during this exercise.  This is for your buddy who will chase and fetch a toy, but doesn’t want to give it up.  This is about learning steps and eventually putting them all together.

Some of y’all have buddies who want to play “tug of war” instead of releasing a toy to you, the Human.  Since I have food allergies, the first two commands my Human practiced with me were “leave it” and “drop it”.  Today we’re going to do “drop it”.

You can teach “drop it” inside on a rainy day.  You can hand your buddy his favorite toy and say “take it” when you do, but my Human prefers to teach “take it” as a separate command later as part of this same exercise.  With one foot on the check cord she rolled my ball and, of course, I pounced on it!  Avoiding touching the toy, she pulled the check cord to bring me to her and waived a favorite tasty treat in front of my nose, saying “drop it”.

At first I was so excited by the treat I tried to take it and still hold on to the ball.  When I dropped the ball to grab the treat, I was quick to swallow it whole and grab the ball before my Human could get it.  We went through this exercise until all the treats were gone.  By this time I realized my Human made NO ATTEMPT to take my ball.

My Human stopped the “drop it” game after about 5 or 6 minutes.  Later the same day we did the same exercise for  about  5 or 6 minutes.  We kept repeating the exercise at least twice everyday for at least 4 days until I became so obsessed with the goodies that I was ignoring the ball and trying to bite the hand that fed me!

Then we switched off and instead of a high value toy, she tossed a toy down the hallway and sent me chasing, but it wasn’t my favorite.  When I brought it back to the “bring” command, she said “drop it”.  When I dropped it she handed me my favorite toy and said “take it”!   Then I got lots and lots of pats, ear scratches and praise!

Leaving a check cord on my collar, we repeated the exercise at odd times throughout the next couple of days.  Every time I  dropped the item I either got lots and lots of lovin’ or she gave me a high value toy while commanding “take it” or she gave me a treat while saying “take it”.

I might note, because I was so treat obsessive, my treats had become part of my meal, just regular food.  Also note that at this point my Human has not taken anything out of my mouth. Everything has been put into my mouth using the command “take it”.  The only things she touches is what she’s going to give to me.  This is important if your buddy wants to play “tug o war” when you touch the item in his mouth.

“Give it” and “hand it” are optional progressions of the “drop it”.  My Human taught me “give” the same way we did “drop it” but she held her hand under my chin and caught the item as I “dropped it”.  Once I mastered dropping it into her hand and learned she’d throw it again, my Human started touching the toy while it was still in my mouth, saying “give”.

When your buddy understands “drop it” and “give” as two separate commands and you’ve practiced them inside and outside, with and without treats you can progress to “hand it”.  This command requires your buddy to pick up an item and “give”.  You can break it into two parts.  My Human started by getting me to pick up a great toy and then rewarding me.  She just pointed for a signal to me rather than confuse me  with more verbal commands.  Since she has always used hand signals with verbal commands so that part was easy.  As soon as I picked it up she praised me, quietly took hold of the toy and said “give”.  Then I got another reward.

We progressed to practicing this with just one toy.  We’d start each game of fetch with the toy on the ground and she’d point to the toy and then turn her hand over and say “hand it”.

Just when I thought this was a fun game I found out that I also had a new job around the house.  If the Human drops something, like a napkin, while they’re eating, I’m told to “hand it”.  They’d always point at what they wanted me to get.  After awhile I just picked up anything I saw them drop and held it up for them to take.  If a piece of laundry drops I pick it up and  follow until my Human has a free hand to hold out.

Once your buddy learns to pick up, take it, hand it and drop it there are all kinds of helpful things he can do for you. 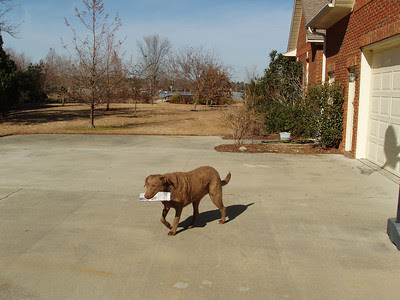 For those of you with dogs who need to learn to “leave it”, I’ll tell you tomorrow how I learned.  It’s always easier to leave it alone than to drop something tasty once it’s in my mouth.

For now, a BrownDog’s work is never done…